What can you(th) do to tackle migration?

Previous Next
What can you(th) do to tackle migration?

January 30, European Parliament Brussels – the Events and Visitors’ Centre of the European Parliament saw groups of excited students from various parts of Europe entering the gates to discuss one of the most relevant and challenging topics of today’s time. The European Youth Seminar “Migration, Free Movement and Refugees – When Dreams Face Death by Drowning” held the promise to engage young people in the understanding of a very complex European issue, and offer them the space to discuss possible solutions.

“When you hear ‘Members of the European Parliament’, it sounds like these politicians are too important and busy to talk to students like us. It was great to hear about their personal story and their passion, to learn what is their motivation to be in politics.”
– remarked one of the students from Hungary, part of the study group of the EP Seminar on Migration that brought 35 students from Hungarian high schools to #VisitEP. 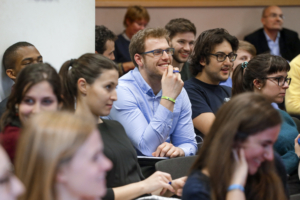 There were too many things to discuss about migration and refugees. Nevertheless, the students coming from 14 different nationalities have come up with great ideas that are reflecting the perceptions of young people. The seminar’s participants have received introduction to the topic from an expert, Joanna Apap, from the European Parliament Research Service, policy analyst on the topic of migration. In the followings, the three different Idea Labs offered space for young people to discuss: “Free movement within the EU as a citizen’s right”, “Refugees and the right to asylum”, and “Which immigration policy for the 21st century?”. During the final plenary session, participants had the chance to present their ideas to MEP Martina Dlajabová (ALDE). 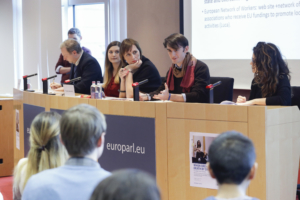 Ideas included city-level incentives that could support local governments in integrating refugees by employment, highlighting the importance of mobile learning opportunities, touching upon the topic of language inclusion, and calling for a stronger emphasis and education of European values as the foundation of the continent; the young participants have come up with a set of great recommendations.

Some of the ideas “could be taken straight to the European Parliament plenary” – Ms Dlabajová remarked.

The European Youth Seminar on Migration and Refugees has given the opportunity to 70 young people from diverse backgrounds to get more acquainted not only with the European institutional framework and Brussels, but also what it means to be an active citizen and a European. The Seminar offered to space to learn and to exchange ideas, but has offered even more: the inspiration to take action together and care about one of the most challenging topics of our time.

AEGEE / European Students’ Forum looks forward to continuing our cooperation with the European Parliament in putting young people and the citizens of Europe in the heart of decision-making in EU policies.

Some more impressions from the participants:

“What have I learnt during the seminar?
I have learnt that even though politicians in the EU did a lot so far, it is still not enough as the pace of life and changes are getting only faster and faster. Sometimes there is even not enough time to think, but only time to react to what is happening.
We all do mistakes when it comes to everyday life, but the most important is to take lessons and to improve things that have been done so far. In order to live in such a fast changing environment, we need to be very flexible, we need to respect one another and work together, only then we can move forward. Everyone one is different and have different opinions, but when it comes to the common future we should pocket our pride.
What also amazes me is that even though we are young, politicians care about our opinion on such important issues. We know that our voice also matters and that gives more courage to act.” Wiola Rudnicka (AEGEE-Warszawa)